These sites are more are available on this Google Map. 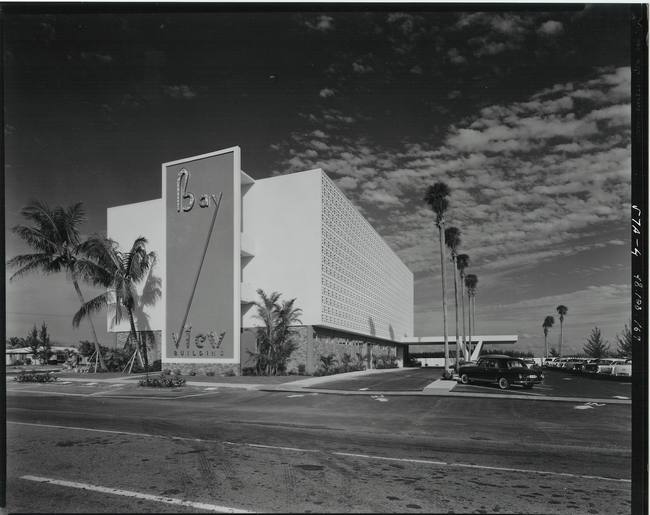 Two McKirahan Buildings from the early 60s, merged together as only McKirahan could do.  Folded plate mesh walls of brick smash into the original 3-story building. It is completely surrounded in decorative breezeblock. Porte Cochere was lost when new addition went up. 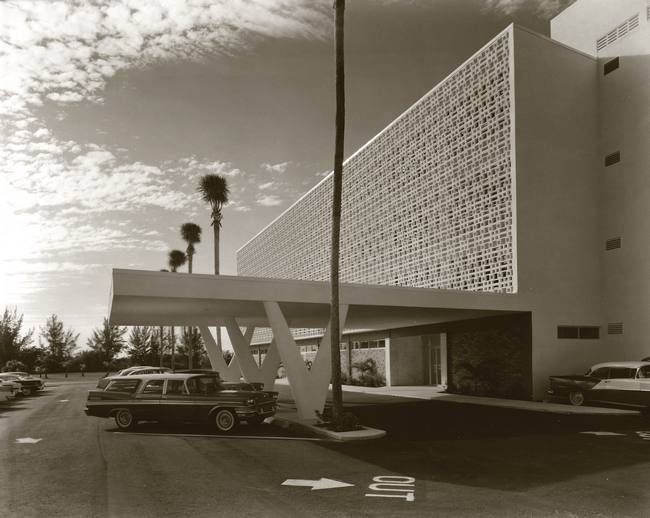 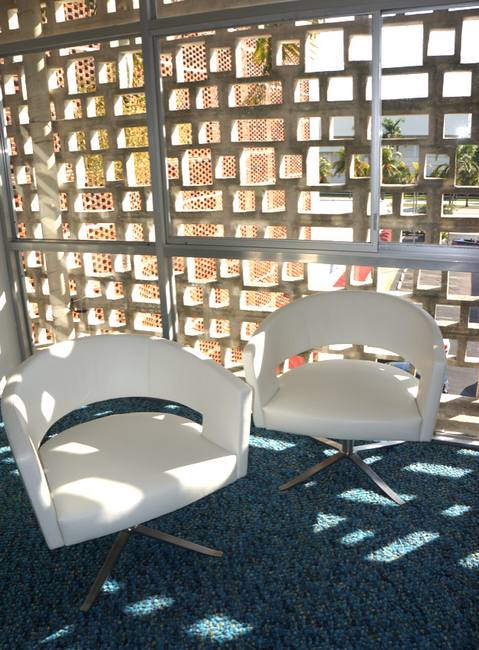 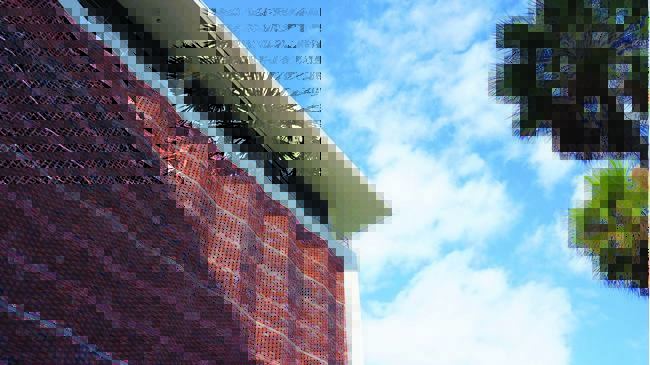 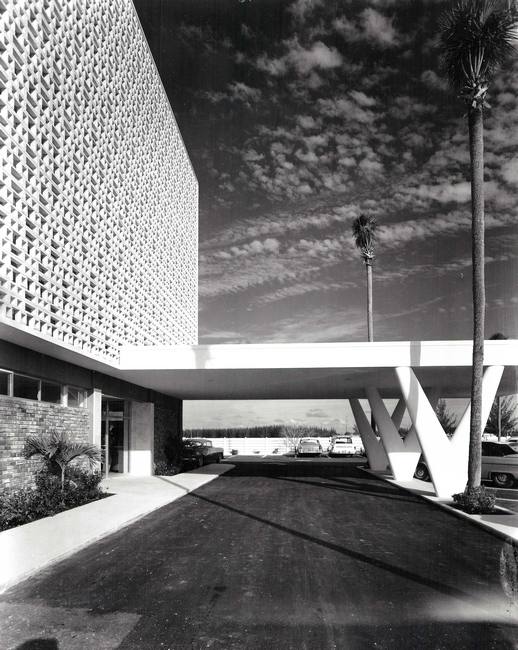 Yacht Club Blvd We call this area “McKirahan Village” as all the buildings on this peninsula were designed by the architect. 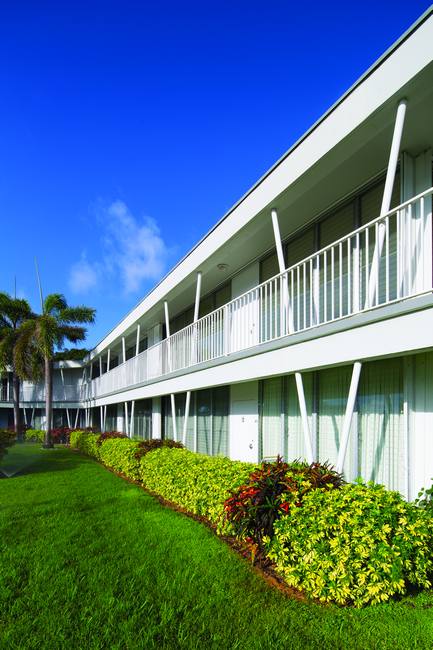 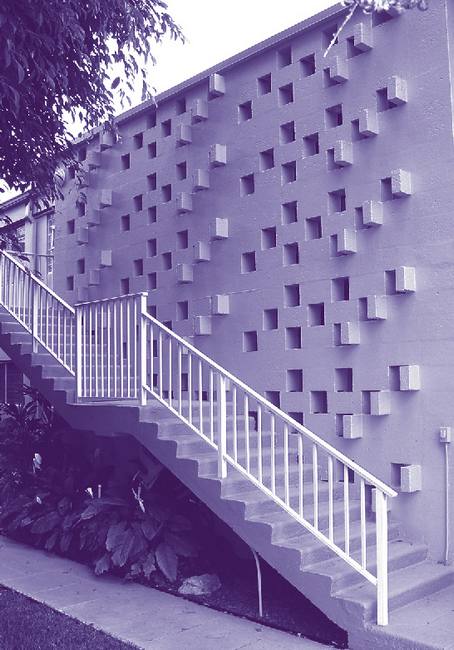 On the right are the Coral Cove Cooperatives: Comprised of 15 connected buildings, which, on the waterside facing Coral Bay are floor to ceiling jalousie glass. Think: International Style meets Bermuda. This project was started in 1955 at its west end and the east buildings were completed in 1957.

On the left at the corner of Seminole is the Bay Club (condominiums), a collection of three buildings in near original condition with terrazzo floors and jalousie windows facing Sunrise Bay. Built in 1954, it was the first on the block, with the exception of the original Coral Ridge Yacht Club, a swinging, modern structure that only lasted about five years before McKirahan was again hired to design a much larger replacement. Bay Club is almost identical in detail –– with its V-shaped supports and projecting catwalks –– to McKirahan’s Bay Harbor Club in Miami’s Bay Harbor Islands. 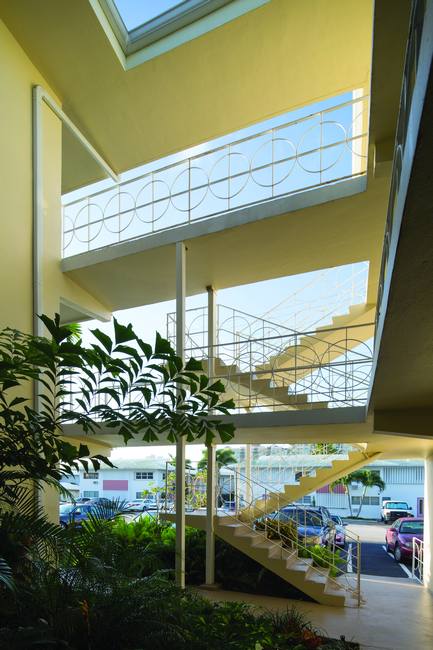 Further east on the left side is the Sunrise Bay Club, built around 1960. These buildings – Coral Cove, Bay Club and Sunrise Bay Club – originally all had the word “Club” in their names as they were co-operatives and owners were considered members, owning shares in the overall corporations, with a deed to a certain apartment. Only Coral Cove operates in that same manner today. Sunrise Bay Club is similar to the other two in that the side that faces the bay is all glass… quite revolutionary for residential buildings of the 50s and early 60s. Sunrise Bay features floating staircases and catwalks and wrought iron railings of the architect’s design.

At the end of this street is the Coral Ridge Yacht Club. Built as a lure to the neighborhood by the Coral Ridge developers, the original yacht club had a super-modern, concrete paraboloid structure facing the Intracoastal Waterway. It was outgrown in just a few years and McKirahan designed its replacement with the breezeblock porte cochere you see still there today. Unfortunately, the buildings original concrete Bermuda-style roofs – which matched those at Coral Cove – were changed out for Spanish tile decades later.

Designed in 1954 and opened the following year. Its buildings, which remain very much the same today on their exterior as when the Club first opened, are very low, earth-hugging structures which all wear Bermuda style roofs like so many white hats. The look McKirahan created for the signature Country Club of Coral Ridge Properties was exotic, sleek and refined. The long, low, clubhouse has a dramatic entrance and its roofs verge on the Polynesian. Other buildings, also by the architect, soon followed and the club became the place to be, morning, noon and especially for glamorous evenings out. Tall, curving walls announced your arrival from tree-lined Bayview Drive, and walls of glass faced the club’s rolling fairways. 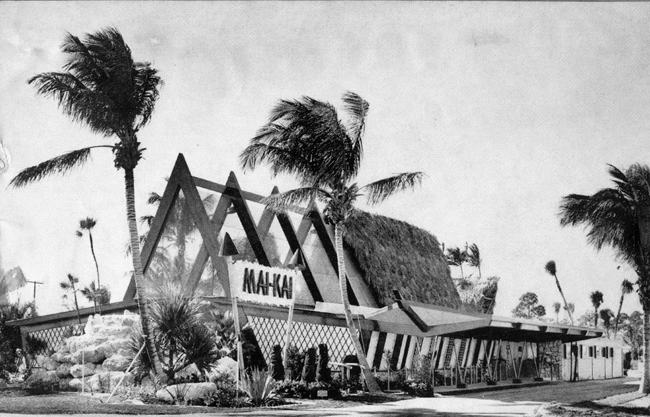 Built in 1956 at a cost of $350,000, it was the most expensive restaurant built that year. Inspired by Canlis in Hawaii, it featured a 40 foot steel A frame allowing an open main area, flanked by dining rooms. The main room was open air with live plants growing inside. A waterfall out front flowed down beside the entryway (later enclosed as the Molokai Bar) and into and through the main room and back out to the pond in front. It embraced the Florida climate. Dining rooms were enclosed in floor to ceiling sliding glass doors to allow them to be air conditioned and keep the open-ness of the building. 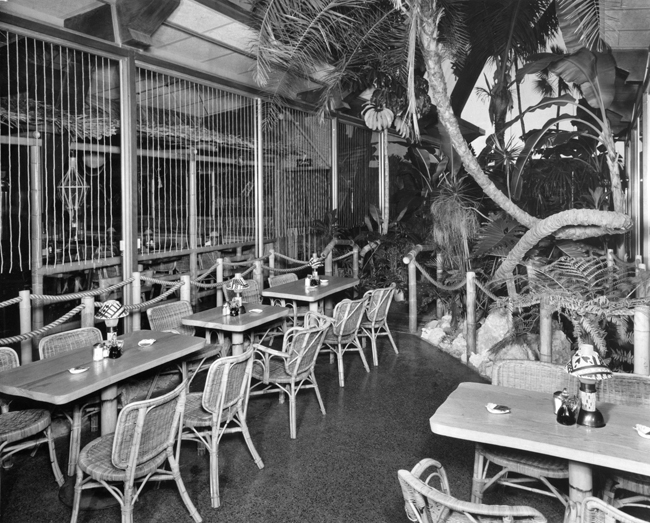 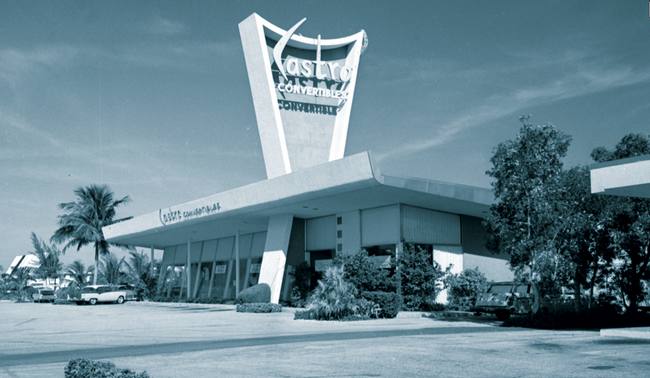 McKirahan was a stickler for detail, and on the original elevation drawings for the structure, he details materials from the stainless steel cladding on the north and south fascia, glass mosaic tile surfacing for the north and south walls and elongated, C-shaped handles for the two front doors. McKirahan chose a modified swash-style lettering for the Castro logo, similar to that used on the Birch Tower and the Bayview Building projects of the      same year.

The architect had a bravura style that often threw caution to the wind in favor of visual excitement. What could have been a bland showroom took on life with windows canted at an 80-degree angle to match the bottom line of the hourglass-shaped pylon. Unfortunately, these angled windows were destroyed by Hurricane Wilma in 2005, and new, impact-resistant windows were used to replace the originals, but were not angled. All of the design items employed added up to a showstopper. According to Bernadette Castro, daughter of the company’s founder. This would have certainly been in keeping with what her dad wanted fo his Florida flagship. According to Castro, “He wanted cars to SEE this building!” 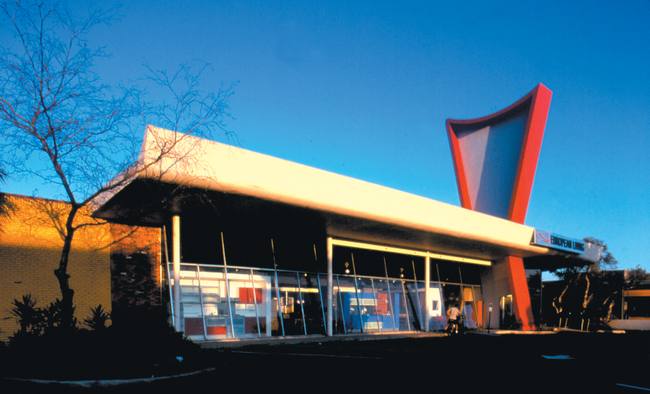 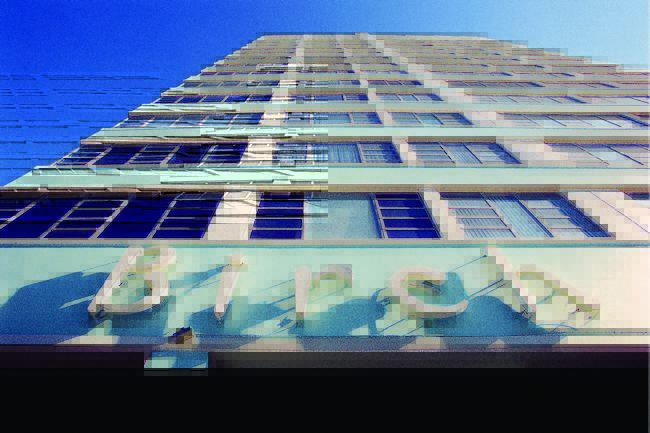 The Birch Tower, a sleek white and sea foam green high-rise built in 1959 is raised up on pylons allowing the all-important tail-finned automobiles of the era to drive right through, unimpeded. McKirahan, like a handful of other architects in the country, was inspired by the works of Le Corbusier in Europe as well as the work of Oscar Niemeyer. The sixteen-story tower built by Leo Goodwin (one of Gieco Insurance Founders) as a 75-unit apartment building. In the early 1960s, Birch Tower was Broward County’s tallest high-rise building and represented the first use of the International Style of architecture. The building’s ground floor is lifted off the ground visually by V-shape piloti in a manner used by Oscar Niemeyer in his Palácio da Agricultura in Brasilia in 1956. This stunning building also features a floating, neon-backed sign that stretches a full seven stories. 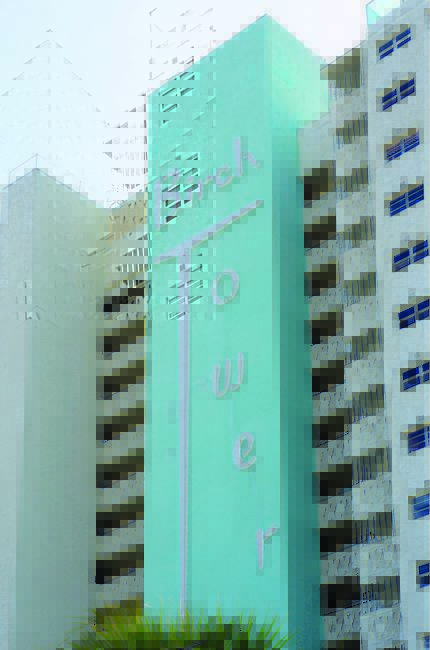 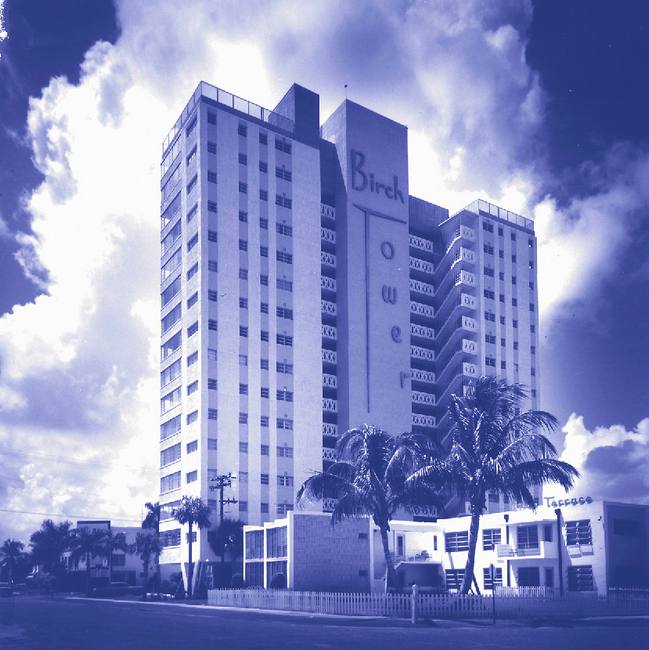 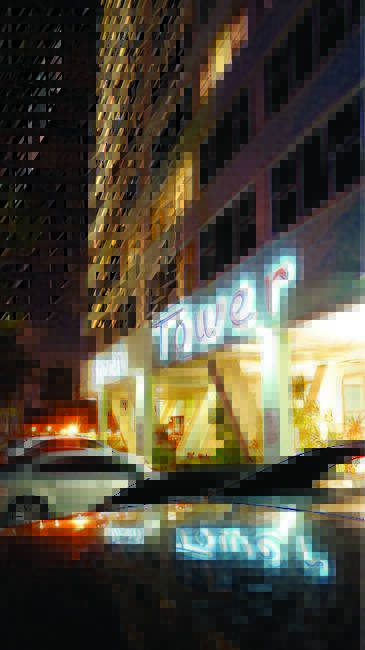 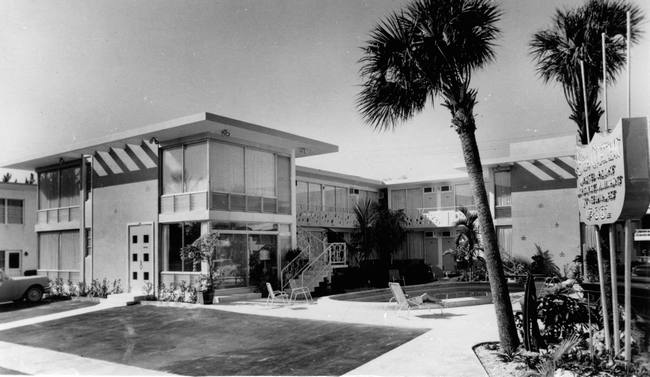 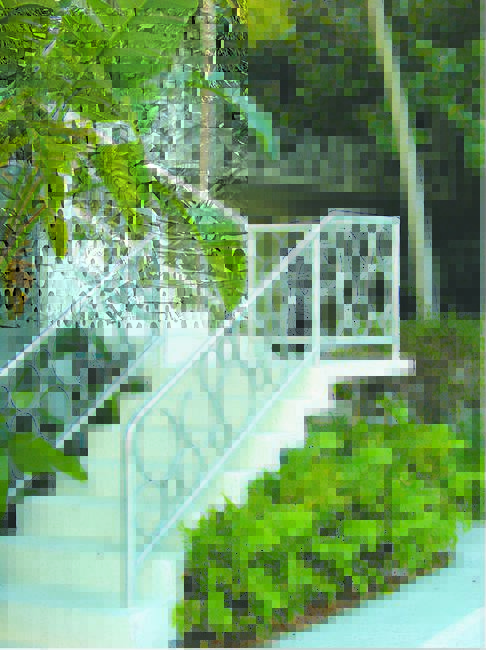 The resort, was designed by McKirahan and boasts second story with “cheese-hole” railings, walls of mosaic tile and openings cut through the overhanging soffits to create a play of light on the walls. Today, a “clothing optional” resort for men, the high first floor walls unfortunately hide these feature for most views.

It was built as a corporate retreat for employees of General Motors in 1952. A version of the signature Frigidaire “crown” logo used in the 50s was created with iron tubing, which soars 50 feet into the air and provides the    supporting structure for the circular staircase standing as an exclamation point greeting guests and visitors.  This dramatic statement along with the walls of glass in all the apartments and the stepped out rectilinear building perimeter contribute to make this an important example of this unique period in creative architecture. 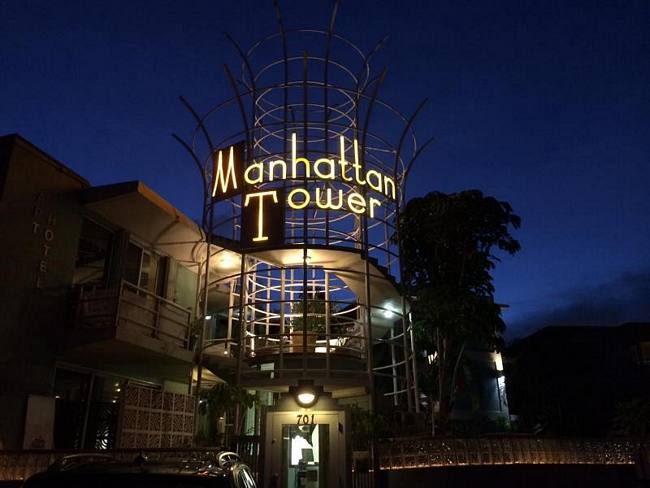 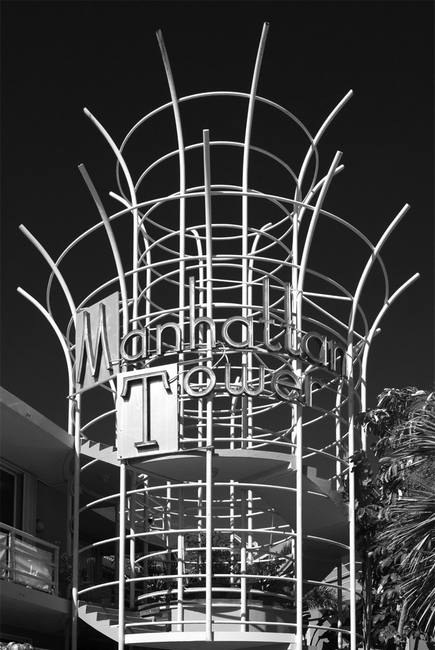 With these buildings and dozens of other examples, a self-guided walking tour of North Beach Village can turn into a fascinating treasure hunt. If you have any time while in Fort Lauderdale, a walking tour of this neighborhood is highly suggested.

These sites are more are available on this Google Map.